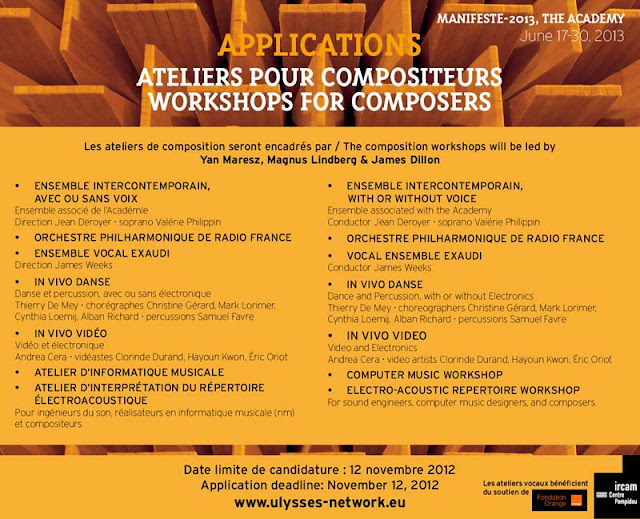 Framework of the Award

The orchestral composition competition will take place in 2012, 2013, 2014 and 2015. Young composers from all over the world are urged to submit their newly created works during their preferred competition year (may enter multiple years).

Final Concert and Other Information

as part of the Rondò 2014 season.
The selected composers - who will have delivered the
score and the parts within the date specified in the
regulation - will stay in Milan for the entire period of
the rehearsals and will work in close contact with the
musicians of the Divertimento Ensemble.

The activities of Divertimento Ensemble with the support of

1. Composers of any nationality, born after 1st
January 1977 are eligible for selection for the
“Franco Donatoni” International Meeting for
Young Composers. Those participating in the
application process can submit one or more
compositions for an ensemble of between 5
and 12 performers. Five copies of each
composition should be sent.

2. Divertimento Ensemble should receive all
scores by 30th November 2012 at the
following address: Via Poggi 7, 20131 Milano,
Italy. Each score must have an attached
filled-in application form (available on
www.divertimentoensemble.org/download/Do
natoni2014_eng.pdf), a copy of an ID
document that proves the applicant’s birth
date, as well as a receipt for the 50 euro
enrollment fee (for each score sent). The
receipt must list the Divertimento Ensemble’s
bank account: Banca Intesa San Paolo, IBAN
IT44H0306909509000018689145, BIC/SWIFT
BCITITMM.
3. Original scores and scores that have
already been published and/or performed are
equally eligible. They should not be
anonymous. If possible, they should be
accompanied with a CD of the performance.
4. An international jury of five composers
(Beat Furrer, Sandro Gorli, Michael Jarrell,
Bruno Mantovani, Alessandro Solbiati) will
select by 15 February 2013 the three
composers who will be invited to take part in
the International Meeting. The selected
composers will be personally informed, and
the selection will also be published on the
Divertimento Ensemble website by 16
February 2013.
5. The three chosen scores will be performed
during the Rondò 2013 season in Milan.
6. Each of the three selected composers,
whose work will be performed during the
Rondò 2013 season, will be invited to write a
15 minutes chamber composition for an
ensemble of at most 7 musicians (flute, oboe,
clarinet, percussion, piano, violin, cello), one or
two dancers and live electronics (ad libitum).
7. The score and the parts must be delivered
by 30 November 2013.
8. The three works will be performed in June
2014 in Milan during the third edition of the
“Franco Donatoni” International Meeting for
Young Composers, as part of the Rondò 2014
season.

9. The three composers will take part in the
rehearsals run by the Divertimento Ensemble,
working in close contact with the musicians,
the conductor and the dancers.
10. The three composers, if they come to
Milano and attend the rehearsals, will be
entitled to a reimbursement of € 1,000. Travel
costs will be met by them.
11. Application for participation in the
International Meeting imply the unconditional
acceptance of these rules. Any dispute will be
resolved exclusively by the Tribunal of Milan.
For information:

Call for Applications for the 6th International Composition Seminar

»Past, present and future are, as you know, bound to the procedure of
successiveness merely by their appearance as cosmic time. In our cognitive
reality, however, this succession does not exist, possessing a truer reality
than the well-acquainted clock, which basically indicates nothing else
then the fact that there is no presence in a strict sense. Time bends itself
into a spherical shape. From within this notion, […] I developed my […]
pluralistic compositional technique, which takes the multiple layers of our
reality into account.«

Music and Time is the theme of IEMA’s next International Composition Seminar,
which – directed by the Ensemble Modern and the composer and conductor Johannes Kalitzke

– will then be taking place for the sixth time in 2013.
In Europe, the seminar is still unique in its bipartite structure:

In a first »try-out« phase, the compositional ideas, developed for the seminar, sound concepts
and technical approaches will receive two days of rehearsal and discussion together with
Ensemble Modern and one day together with both Ensemble Modern and
hr-Sinfonieorchester. Intensive work sessions will offer the explicit opportunity, to rehearse
only parts of the newly developed or still nascent compositional ideas or sound visions.

In the second phase, ideas and insights gained during the first phase are incorporated in the
new pieces; the works are completed. After a rehearsal phase that also leaves room for
exchange and discussions, the new works see their premiere.

The International Composition Seminar 2013 and its two final concerts are integrated into the
second edition of the festival cresc… Biennale für Moderne Musik which takes place between
21st and 24th November 2013 in Frankfurt and Darmstadt.
Through the cooperation with the Frankfurt Radio Symphony Orchestra, hr-Sinfonieorchester,
the International Composition Seminar will again be giving the opportunity to work together
with a large orchestra.
The seminar will be offering 4 assignments of works for ensemble and 2 assignments of works
for orchestra and ensemble.

The guiding theme is connected to the festival theme of cresc… 2013. Under the topic »Music
and Time«, the work and mindscape of composer Bernd Alois Zimmermann are brought into
focus and contrasted with current approaches to the topic.

The festival is a joint undertaking of the partners Ensemble Modern, Hessischer Rundfunk, Alte
Oper, Internationales Musikinstitut Darmstadt, Institute of Contemporary Music at the
Frankfurt University of Music and Performing Arts and Staatstheater Darmstadt.

Composers interested in this project are invited to participate.

1st Phase: 15th – 17th February 2013 in Frankfurt
In this first of two phases, the compositions and ideas developed during the seminar will
receive two days of rehearsal and discussion together with Ensemble Modern and one
day together with both Ensemble Modern and hr-Sinfonieorchester. Intensive work
sessions will offer the explicit opportunity, to rehearse only parts of the newly developed
or still nascent compositional ideas or sound visions.

2nd Phase: 17 th – 24 th November 2013 in Frankfurt and Darmstadt
Ideas and insights gained during the first phase can be included into the pieces and the
material is completed before for the second phase (until 1st October 2013). This rehearsal
phase that also leaves room for exchange and discussions, will result in concerts during
the festival cresc... (21 th -24th November 2013).

Until 1st October 2012. Following the nomination of participants and the assignment of the
compositions for ensemble or orchestra plus ensemble, all participants will be informed about
the exact instrumentation and other relevant conditions.

IEMA covers: travel (within Europe) and accommodation in Frankfurt

Detailed CV, 1-2 scores (also as PDF if available), not older than 2 years, one work for ensemble,
optionally one score for orchestra, optionally recordings (CD or digital), a short text regarding
your compositional ideas on »Music and Time«.